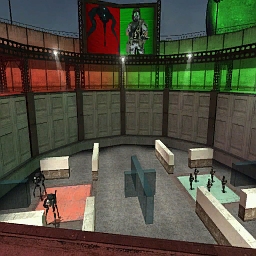 This map pits different groups of enemies in combat against each other, with the players able to bet on each side to win points.

Players can get into the arena, and join the duals with NPCs or the enemy player team. If you are red team, you have to go through the red door, NOT blue door. Same goes with the blue team, they have to go through the blue door. If only red team, or only blue team are able to go into the arena, then you are out of luck. Unless, see Trivia down below. Players will be equipped with weapon_crowbar, weapon_healer, weapon_pistol, weapon_357, weapon_smg1 (with one grenade), weapon_shotgun, and weapon_ar2, when the battle ends, the weapons get unequiped, and they respawn back at the audience bay.